For those of you who haven’t already seen via Facebook…we’re expecting baby #2! I’m 7 weeks 4 days, so it’s still very early…but we had an ultrasound today and everything looked perfect, with a steady heartbeat of 167. It made it so real to see it, especially for Jon, but for me too. We’re all very excited! In the pic below, the little bean floating in the black area is the baby. The top of the little bean is the head, and the white spot is the eye. It’s measuring perfectly, so they confirmed my due date of September 15th, 2013. 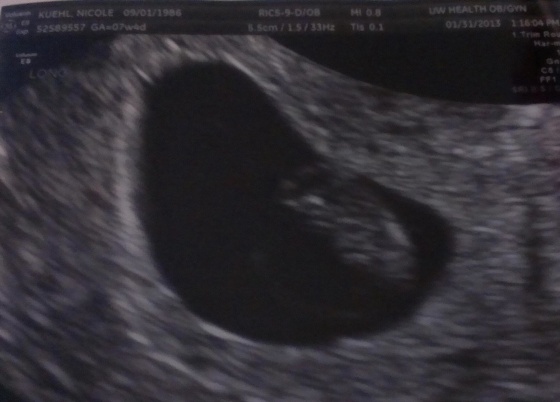 And McKenzie is over-the-moon…she is so excited to be a big sister! Every morning she asks, “Is the baby snoring?” It’s adorable. She will be 5 by the time the baby is born, so I think I’ll have a pretty awesome little helper. I’m so glad we waited longer before having a 2nd, the timing is really great for us. =) 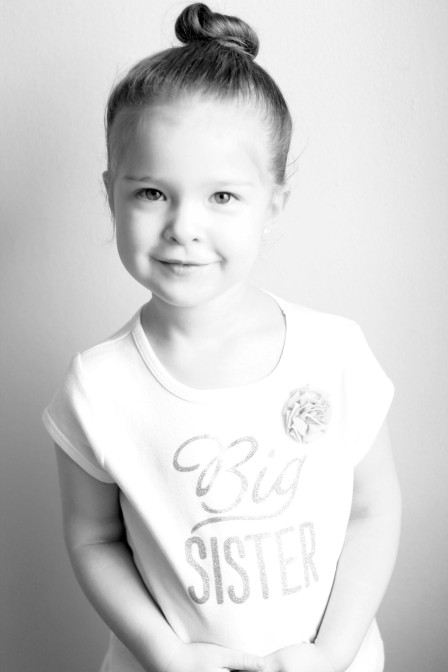 We had already told our families, but to make the pregnancy “public” (aka: a Facebook post), I had this photo-shoot with McKenzie in her new “Big Sister” shirt. Her bedroom walls are purple, so it worked out nicely! I like how they turned out. =) I was excited to find a cute shirt, because sometimes I think the shirts like that are a little too “kiddie” looking.

As for me, I’m feeling pretty well for the most part, just super tired. And most foods sound gross…I haven’t gotten sick, but I’m definitely queasy. I’ll wait too long to eat (until I’m overly hungry), and then nothing sounds good and my empty stomach is upset. I’ll usually just end up having a few crackers. And one night I had wicked heartburn, which I never had with McKenzie. Nothing too terrible though, it could be worse.

For those of you who are curious: yes, we plan on finding out the sex of the baby (I’m too impatient not to know!). To be honest, I’m sorta hoping for a boy because I think one of each would be pretty awesome…but hey, if it’s a girl we can reuse all McKenzie’s stuff so that would be awesome too. Either way, we were so excited to see the little heartbeat today, and we can’t wait to meet “it”!

So tell me, y’all, are 2 kiddos a lot crazier than 1? Were your 2nd pregnancies different than the first?

Welcome to Life So Lovely! I'm Nicole: an Active Duty Army Wife, professional photographer, and currently a stay-at-home momma to our beautiful 4-year-old daughter. I love photography, reading, writing, and finding fun things to do with my family. I blog for myself, but I love posting fun photos, crafts, and delicious recipes, too! Stay tuned, and follow my adventures as a woman, wifey, and soon-to-be momma of two.